PAINTING, SPACE AND THE MIND

Remarks on the art of Michael Burges

Colour has, in the past, been used as a means of painting, but the 20th gave it an upgrade to being also the subject of painting. There are several ways of treating colour as a subject in painting. Michael Burges has developed his own ways in this artistic context. As he takes colour seriously in itself, not only as a means to an end, he has decided to be non-figurative. You may call it “abstract” or “autonomous” or even “absolute” – any of these terms would be correct, because the paintings of Michael Burges invest them- selves into all these aspects.
Non-figurative art wears a coat of many colours. It can be called “lyrical” or “expressionist”, “informal” or “gestural”. The art of Michael Burges doesn’t fit into these traditional categories, because even in one single work more than just one of these characteristic can be found. His painting follows an almost scien- tific plan and development, systematically exploring the aesthetic possibilities of colour and space and their relations, as well as those of the painting to the viewer and vice versa. The art of Michael Burges, therefore, has been called “the science of painting”, and there are indeed links to the very nature of modern scientific exploration in physics.
Links to the governing principles of Buddhism are also present, but the painter would deny to be eit- her a scientist or a Buddhist. Michael Burges is a painter. That is the level of discourse, not quantum mechanics or any kind of religion or philosophy. If any of such things come into view, one will always have to keep in mind that there may be references, never illustrations. 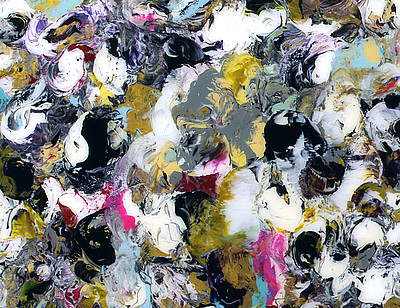